Welcome to StoriesGames Wiki, Stories: The Path of Destinies is an action RPG that feels like an enchanted book with a number of tales for you to play through. a vibrant, magic-filled realm about to be overtaken by the imperial armada. You are the last sky corsair, the final hope of the people. With Spearhead's unprecedented storytelling system, there is no set path: Your actions affect not only the flow of events, but also the motivations and behaviors of other characters, making each playthrough a new experience. 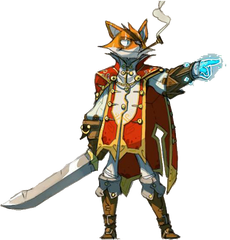 Reynardo is the protagonist of Stories: The Path of Destinies He is a male fox with orange fur and black pupil eyes. Should he rescue his oldest friend, the shiftless Lapino. Worse, he’s still in love with the Emperor’s adopted daughter, who he met in sword fu school.
Read more...

Want your community included? See how!